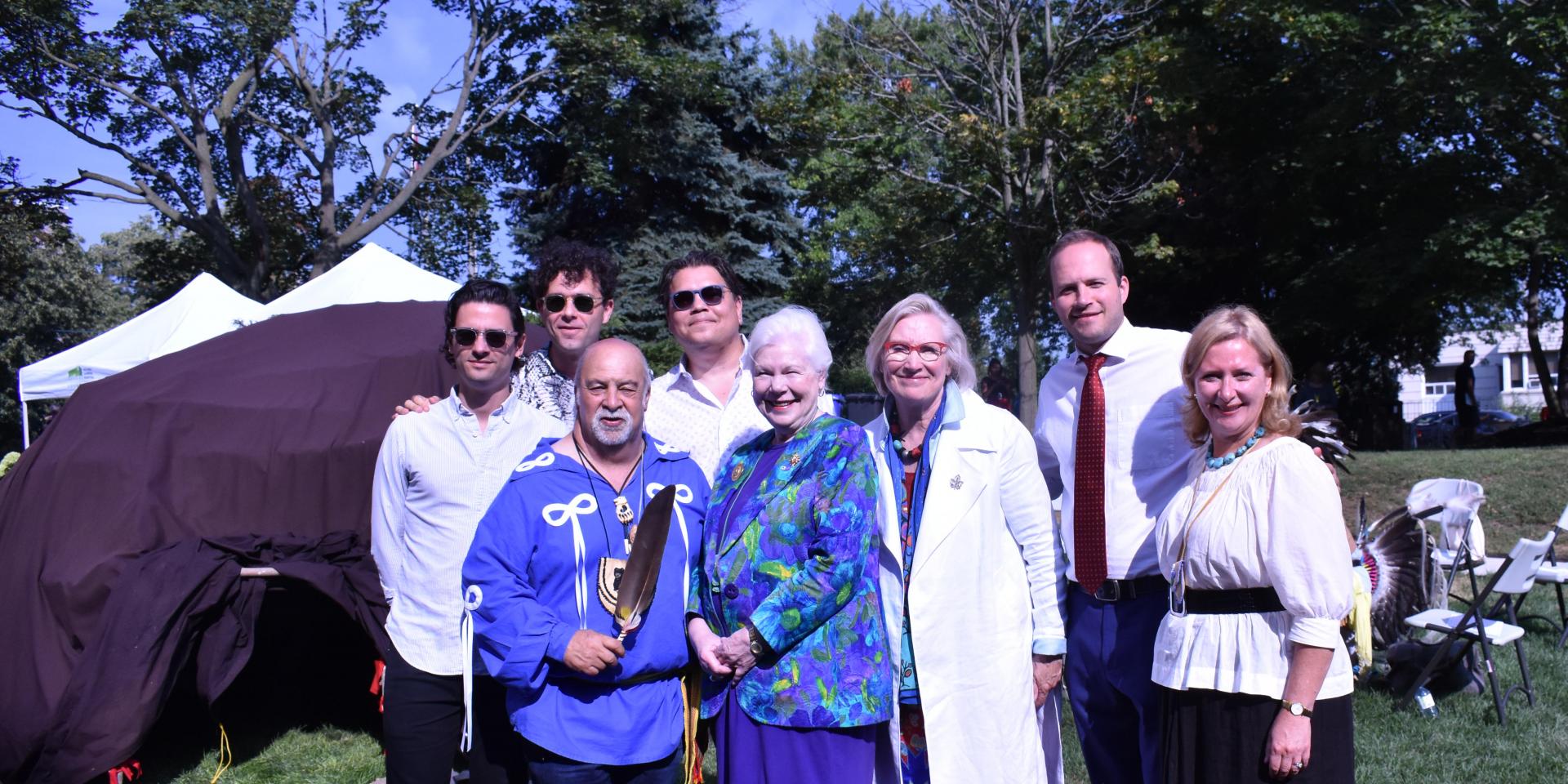 Under the leadership and guidance of Elder Little Brown Bear, Manager of Aboriginal Culture at MGH, community members of The Aboriginal Healing Program built the Sweat Lodge to offer a traditional and sacred space to those seeking healing and spiritual cleansing.

“We want to create a welcoming and inclusive setting for every person who walks through our doors. The opening of the Sweat Lodge marks a historic milestone on our journey towards truth and reconciliation,” said Sarah Downey, President and CEO, MGH.

“Elder Little Brown Bear and members of The Aboriginal Healing Program have been instrumental in helping us to raise cultural awareness and offer a holistic place of healing for everyone.”

The event also honoured Arkells for creating space for their Aboriginal brother and singer-songwriter Jeremy Dutcher at this year’s JUNO awards. After Dutcher was cut off during his acceptance speech, Arkells offered their speech time to him following their win for Rock Album of the Year.

In response to their invite, Arkells member Max Kerman remarked, “The highest form of admiration goes to those who work every day to seek justice for the underserved and disenfranchised. It’s an honour to spend time with a leader like Little Brown Bear on this special day.”

A place for spiritual healing and cleansing

The Sweat Lodge ceremony, a tradition practiced for many years, is a spiritual reunion with the creator, and a respectful connection to Mother Earth.

Sweats may be conducted for healing or as a preliminary cultural ceremony in advance of other activities such as a fast or vision quest. The sweat offers spiritual cleansing and purification, regardless of an individual’s spiritual path.

The lodge is designed to provide a safe, sacred and confidential place. Participants sit on the ground encircling the sacred pit to concentrate on the spirits invited to the ceremony and brought in with the 'grandfathers'. The entrance faces east creating an umbilical cord between the sacred fire and Eastern Doorway. The stones are heated in the fire by the fire keeper. Medicinal cedar water is poured over the grandfathers in the sacred healing pit at the centre. The lodge brings together all four elements: earth below, air around, fire in the grandfathers and water in the steam.

The lodge is constructed in a dome shape, approximately four meters in diameter, and covered with layers of heavy but breathable fabric, like military canvas ensuring that light does not leak into the lodge.

“The sweat lodge represents the Aboriginal way of life and return to our mother's womb, says Elder Little Brown Bear.

“The water and steam are meant to purify those who enter, allowing each of us to emerge reborn. The lodge is a powerful healing tool.”

In addition to the Sweat Lodge, Little Brown Bear and members of the Aboriginal Healing Program have supported MGH in many ways to offer a supportive and inclusive healing environment, including the opening of the Indigenous healing room in the paediatric wing in 2018 and the newly painted medicine wheel mural on the palliative and complex care units in 2019.

MGH’s redevelopment project – the largest transformation in the hospital’s 90-year history – will see the opening of a sacred medicine garden and All Nations room for smudging ceremonies.

Creating inclusive environments that identify and remove barriers and ensure equity and access for all community members and their families is a top priority for MGH. Learn more about supporting the sweat lodge and construction of a Tipi for traditional teachings: mghf.ca/aboriginalhealing.

As the only acute care hospital located between the City of Toronto and Scarborough, Michael Garron Hospital serves one of Canada's most diverse communities with 22 distinct neighborhoods, more than 50 languages spoken and close to 40 per cent newcomers to Canada; the 1.5 per cent of people in the hospital’s catchment that identify as Aboriginal is slightly higher than the City of Toronto.

Nestled in the heart of East Toronto, Michael Garron Hospital (MGH), Toronto East Health Network, is a vibrant community teaching hospital serving more than 400,000 people in 22 distinct neighbourhoods. For 90 years, MGH has delivered high-quality, patient-centred healthcare services to families along the continuum of care, from welcoming a new life to facing end-of-life. MGH has continually renewed its commitment to community by adapting its programs and services to meet the evolving needs of the diverse population it serves. MGH is a leading full-service hospital with strong community and research partners, including the University of Toronto.