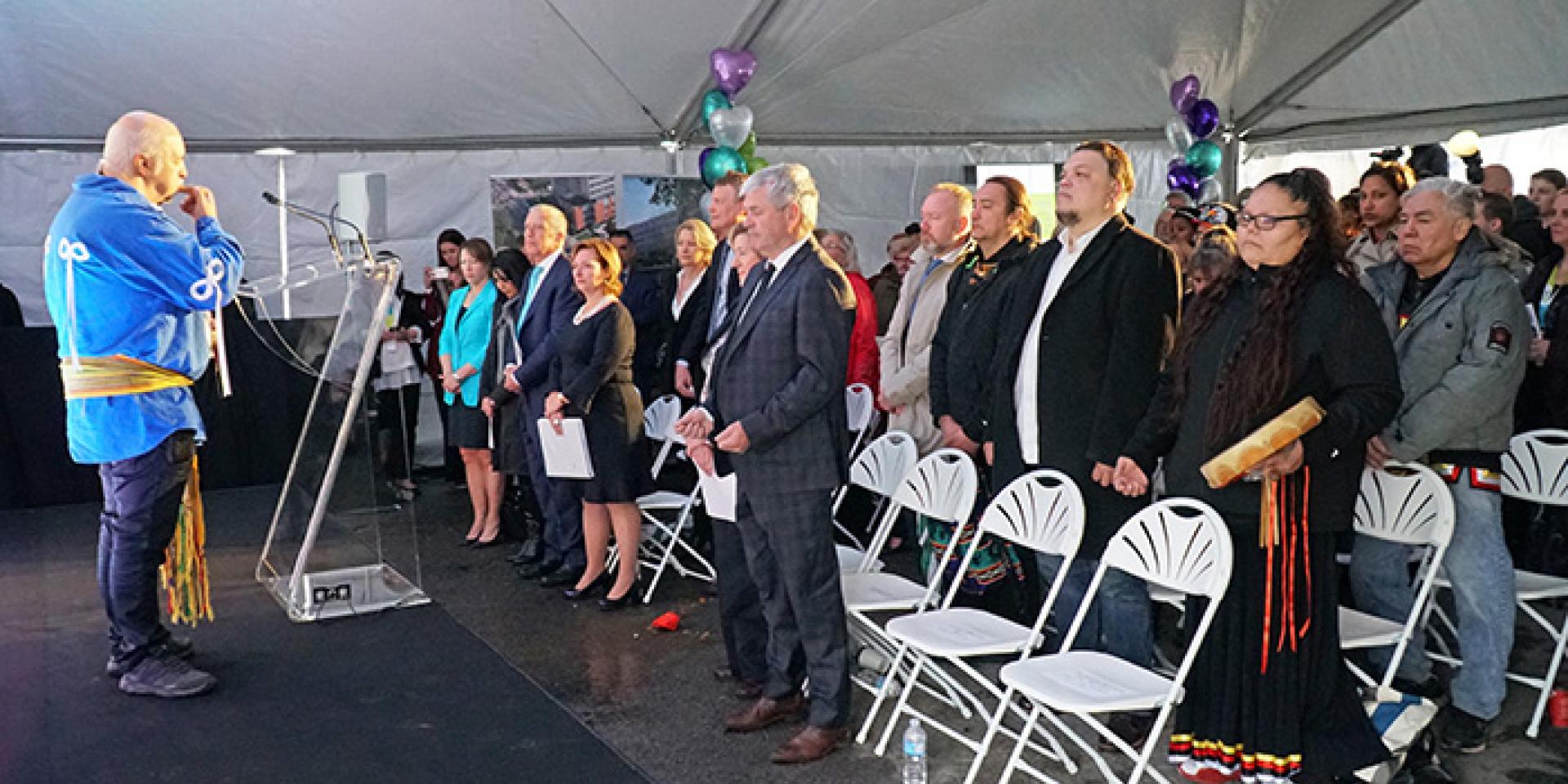 On April 25, Michael Garron Hospital (MGH) marked a major healthcare milestone in East Toronto by breaking ground on the largest redevelopment project in its history.

The day was also marked with an acknowledgement and blessing of the traditional grounds that the hospital will now graciously build and develop its new community and healthcare hub. Métis Elder Little Brown Bear (Ernest Matton), Manager of Indigenous Culture at MGH, and Aboriginal Healing Program lead, helped to orchestrate the ceremonial event.

June 21 marks National Indigenous Peoples Day – a day for Canadians to celebrate the heritage, diverse cultures and outstanding achievements of First Nations, Inuit and Métis. Elder Little Brown Bear was appointed to the Order of Ontario in 2016 for his meaningful work as a community capacity builder and spiritual ambassador. In 2017, he was honoured by the Centre for Addiction and Mental Health for his exemplary efforts caring for community members in the Aboriginal Healing Program.

In the weeks leading up to the groundbreaking ceremony, hospital president and CEO Sarah Downey presented Elder Little Brown Bear with sema to request him to bless the land. Sema, or tobacco, is one of four sacred medicines in indigenous culture. By accepting the gift of sema in his left hand, Elder Little Brown Bear accepted Sarah's request.

“It was important to me to ask Elder Little Brown Bear to bless the land to start this project off on the right foot,” says Sarah.

“Healing is a big part of what we do at MGH, and taking part in Indigenous reconciliation will require an ongoing effort with acts of recognition and inclusion.”

On the day of the ceremony, Sarah noted “We are so grateful and humbled to have the opportunity to live, work and provide care here.”

Elder Little Brown Bear worked jointly with community members to plan the elements of the ground blessing, which was also streamed live on the day of the event.

Before the formal ceremony began, the ground was smudged with sacred tobacco and sage.

“This is done so that we move together as one mind,” notes Little Brown Bear.

On stage, Elder Little Brown Bear was joined by Standing Eagle Feather Woman and Cedar Woman (Amanda Spanish) and Man that Walks Above the Ground (Justin Shilling) who both performed honour songs with hand drums to open and close the event.

Gary LaRocca shared remarks on behalf of his sister, Chief Kelly LaRocca of the Mississauga's of the Scougog Island First Nation. He noted the importance of acknowledging the root causes of health issues in the Indigenous community.

“Addictions plague our communities as a residual impact of colonial practices…the indigenous spirit somehow remains strong. We know there is hope,” says Gary.

“Chi miigwetch [thank you in Ojibwe] for your commitment to putting effort and resources toward wellness of the Indigenous community.”

Next, was the ceremonial spreading of the cedar water with an eagle feather.

“Cedar water is a healing medicine,” explains Elder Little Brown Bear. “If something has happened on the ground, Mother Earth will heal it with the water, it purifies the grounds that will be built on.”

The Eagle feather is also of very high significance. Eagles are the closest to the creator and carry our prayer to the creator. Elder Little Brown Bear has his Eagle with him at all times and during the ceremonies that he continues to perform for people.

Elder Little Brown Bear concluded the event with the smoking of a ceremonial pipe and sacred ceremonial traditional tobacco (sema) asking the spirit from the sky world, the spirit animal, the seven directions and creator to look out for the people who will work, care and heal on the grounds going forward for our future generations.

“It is about helping to bridge the gap so we can all heal and practice harmony as brothers and sisters in helping one another, and practicing harmony and balance with the Medicine wheel.”

Editors note: This story was developed in collaboration with and review by Elder Little Brown Bear.