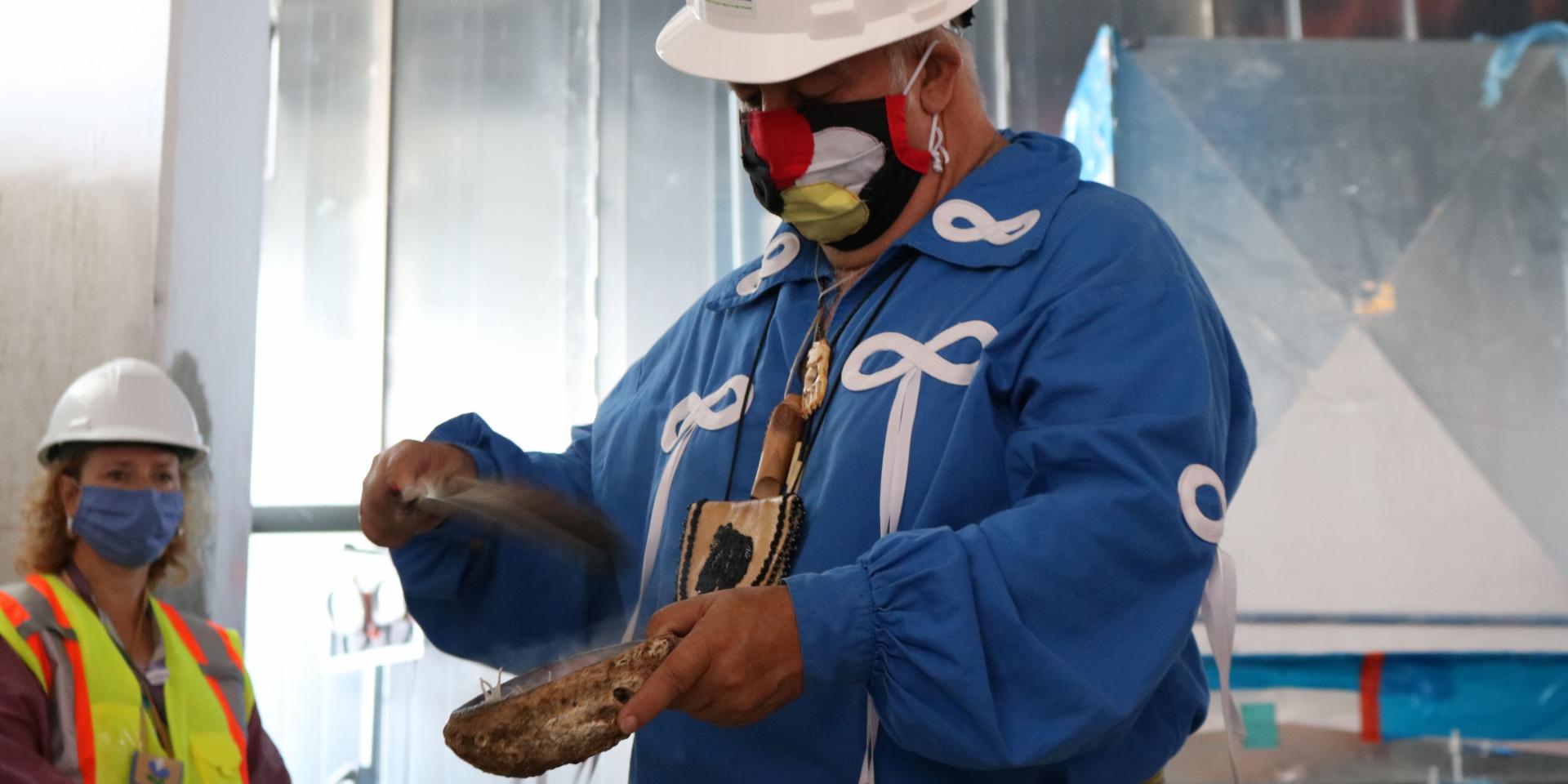 Michael Garron Hospital (MGH) hosted a healing ceremony at its redevelopment site on Friday (Aug. 14) in an effort to cleanse the space as construction continues on the hospital’s new Ken and Marilyn Thomson Patient Care Centre.

Led by Elder Little Brown Bear, director of Aboriginal education, programs and culture and The Aboriginal Healing Program at MGH, the ceremony included smudging, an Aboriginal tradition that involves the burning of sage to rid areas of negative energy.

Elder Little Brown Bear began the smudge in the site's Eastern doorway where the sun rises and which represents spring and new beginnings.

He then smudged the Southern, Western and Northern doorways before completing the circle back to the East.

Each doorway represents a colour on the Aboriginal medicine wheel, sometimes referred to as the people’s wheel.

The colours — yellow for the East, red for the South, black for the West and white for the North — signify unity of the nations, says Elder Little Brown Bear.

“We’re cleansing MGH’s redevelopment site for all nations so that everyone feels safe, healthy and protected here,” he adds.

The healing ceremony and cleansing was conducted in response to an act of racism and disrespect that took place on MGH’s redevelopment site in June.

It follows an outpouring of support from the East Toronto community, when dozens of local residents came together to denounce anti-Black racism through the creation and sharing of art.

MGH’s redevelopment site was originally blessed by Elder Little Brown Bear before ground was broken for the new Patient Care Centre in April 2018.

This most recent smudging brings positivity and balance to the space, says Elder Little Brown Bear. The cleansing helps the community and its members to move forward.

“This site was disrespected,” he says. “We are restoring it to where it needs to be.”

Construction workers and senior officials from MGH were also in attendance at the ceremony; some participated in the cleansing.

“I want to extend my sincere gratitude to Elder Little Brown Bear for leading us through this healing ceremony and ensuring the future home of our new Ken and Marilyn Thomson Patient Care Centre remains a place of unity and healing for all nations,” says Sarah Downey, president and CEO of MGH.

“Racism has no place in our hospital and community and, together with our East Toronto partners, we’ve been able to send a clear message that this hate will not be tolerated. We understand that there is still work to do and are committed to taking the necessary steps to ensure an environment where all people are treated with compassion, dismantling systemic racism or discrimination and affording equal opportunities.”

In addition to starting a dialogue around anti-Black racism at MGH and in the East Toronto community, MGH has joined its Ontario Health Team (OHT) partners in committing to the recommendations put forth by the Black Experiences in Health Care Symposia.

MGH has also taken steps to establish an Inclusion Alliance, a group of hospital staff and physicians that will meet regularly to facilitate and advise on MGH’s anti-racism initiatives and other forms of discrimination.

To begin, the Alliance will focus its efforts on addressing anti-Black and anti-Indigenous racism.

Members may also partner with the broader East Toronto community to increase equity and social justice.

Open letter to our community: We stand united against hate