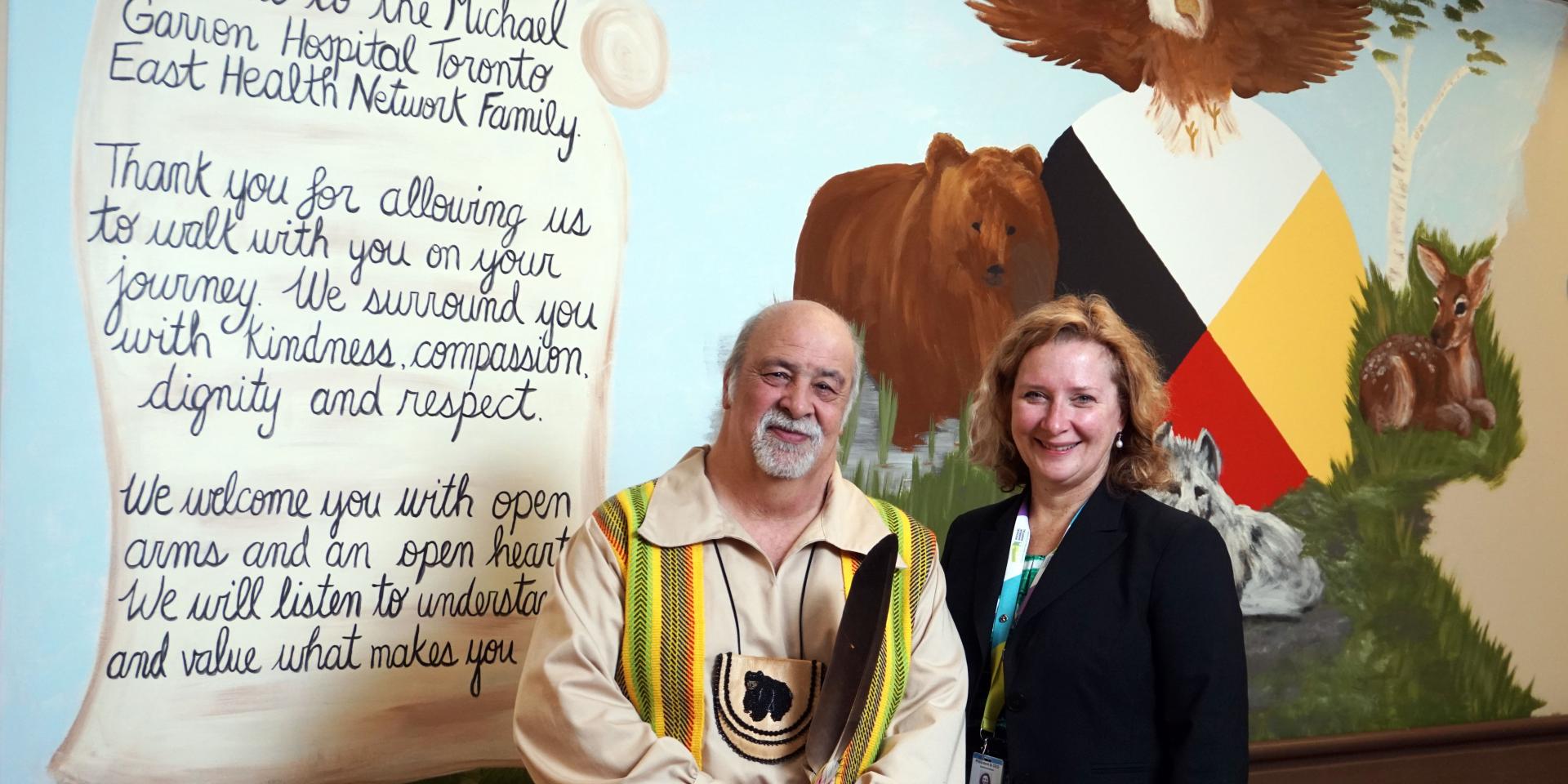 ‘We welcome you with open arms and an open heart:’ New medicine wheel mural opens on palliative and complex care units

A dedication ceremony led by Métis Elder Little Brown Bear on May 15 marks Michael Garron Hospital, Toronto East Health Network’s newest initiative towards active reconciliation and inclusivity --a large mural of a medicine wheel, signifying the importance of healing and love that runs between the hospital walls daily.

“We’re not just individuals out in the wind,” said Elder Brown Bear, addressing the crowd, which included hospital staff, community members, Aboriginal and non-Aboriginal agencies and participants of The Aboriginal Healing Program.

“Family is what it’s about,” he said.

The mural originates from what Palliative Specialist Karina Wulf saw as a small act to show that her hospital community is a safe space for all. She wanted to place a medicine wheel on her office door, beside a small pride flag sticker already on display.

After offering him a gift of tobacco, from left hand to left hand, one of five sacred medicines that the Elder uses, he had a pipe ceremony at his sacred fire and had a vision for the mural now on display at the entrance of the Palliative and Complex Continuing Care Units.

The mural is part of larger journey towards truth and reconciliation, said Sarah Downey, CEO and president of MGH. In a thoughtful introduction to the ceremony, she emphasized the significance of Elder Little Brown Bear’s role in MGH’s continuous efforts to create a welcoming and inclusive hospital environment.

Each direction and colour of the medicine wheel has a spirit animal, which Elder Little Brown Bear envisioned.

As patients enter the unit, they are greeted by the Deer Clan (Waawaashkeshi), which symbolizes the nurturance of hospital staff as each client begins their journey from the Eastern doorway, represented in yellow on the wheel.

At the Southern doorway, in red, Wolf Clan (Ma’iingan) represents the dedicated community of loved ones that walk beside them.

“The Wolf provides support, caring eyes to watch over them, open ears to listen, an open mind to learn and a caring heart to feel for them,” says Little Brown Bear.

People need a strong clan to carry them up into the sky world, said Elder Little Brown Bear, referring to Bear Clan (Makwa) in the West, in black.

“All of the prayers, and all of the tears, sit on the wings of the eagle,” he said, teaching the crowd about the importance of Migizi, who brings them up to the Creator so that their spirits can be held in the North, represented by white on the medicine wheel.

Elder Little Brown Bear also announced a Cleansing/Smudging room and a Traditional Sweat Lodge are on the near horizon for the MGH | TEHN community, which will further help family and community members on their healing journeys.

“Michael Garron Hospital has made itself an inspiring leader in community innovation for all of Canada to see,” said Michael Kerman, who attended the ceremony to show his support for Elder Little Brown Bear and the community members.

“I’m moved by Sarah’s leadership, and what the hospital has done,” Kerman said. He added that displays like the mural offer a hospital setting for Indigenous peoples who might be looking for a place to feel understood and accepted in the health care world.

“We welcome you with open arms and an open heart,” reads the text on the mural.

“Thank you for allowing us to walk with you on your journey.”