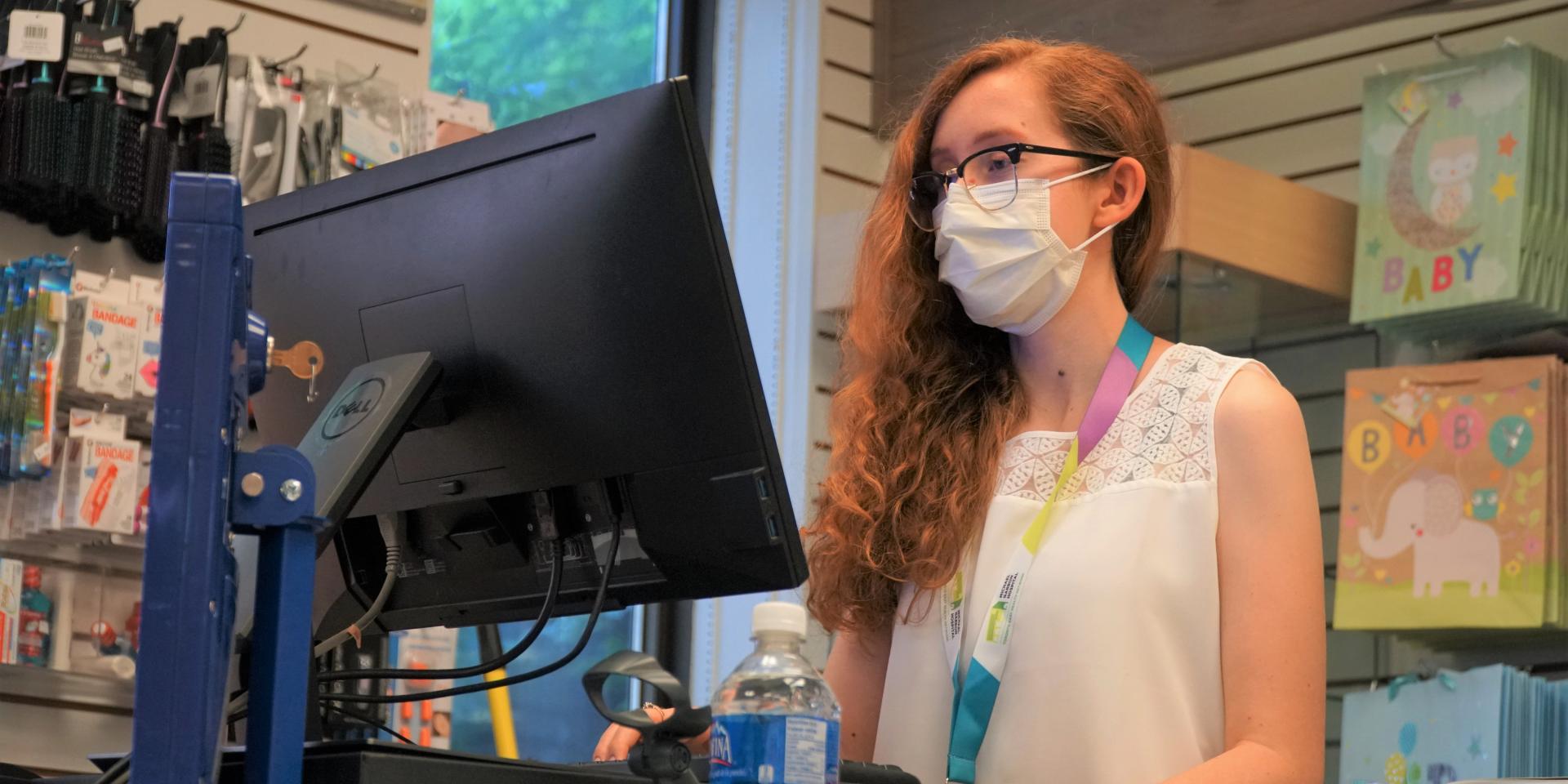 Laura Reedel has volunteered at MGH for two years, much of which she has spent helping in the gift shop.

After temporary closure, volunteers get back to business at the General Store at MGH

The General Store at Michael Garron Hospital (MGH) has reopened its doors — with a few minor modifications.

A layer of plexiglass now sits between the cash register and customers at checkout. A maximum of only five shoppers are allowed in the store at a time. And masks must be worn and physical distancing must be observed by everyone in the shop.

For the volunteers who have returned to work at the General Store in recent weeks, however, much about MGH’s gift shop — a centrepiece in the hospital’s Coxwell Avenue lobby — remains the same.

Items like books, snacks and greeting cards still line the store’s shelves. Bouquets of delicate flowers and a selection of plush toy bears offer visitors a chance to nab gifts for loved ones at the hospital. And tucked outside the back of the shop remains a terminal and silent sellers where MGH staff and patients can purchase their lottery tickets.

“All the familiar faces have started to come in again,” says Laura Reedel, a long-time volunteer at the General Store. “It’s nice to get back into the swing of things.”

Laura is one of a handful of volunteers who returned to MGH in August after the hospital’s volunteer program was suspended in March at the start of pandemic.

During that time, the volunteer-run gift shop at MGH was also temporarily closed. “It was a little upsetting because I love coming in and helping out,” says Laura, who lives in the East York community and has been volunteering at MGH for two years. “But, of course, I understood the circumstances.”

While it was closed, the General Store became a makeshift storage space for around 100,000 masks — ones that had been donated to or sewn by community members for MGH through the PPE Drive.

At times, the shop also served as a space where clinical screeners could prep visitors entering MGH to see loved ones who were under droplet isolation precautions. During these conversations, guests received information about how they can best protect themselves and their families before, during and after their visit.

“We had so many people coming in that first week and saying, ‘I’m so glad you’re open again,’” Brendon says. “They didn’t even necessarily buy anything. They just wanted to come by and say hello and welcome us back.”

“The store looked and functioned totally different during that time,” says Brendon Lam, retail coordinator at the General Store at MGH.

Brendon’s role also changed as he began managing the screeners who were hired at MGH days after the General Store closed its doors and the volunteer program was suspended.

He continues this work despite returning to his usual duties at the gift shop. Like Laura, he says he was excited to get back to business.

“We had so many people coming in that first week and saying, ‘I’m so glad you’re open again,’” Brendon says. “They didn’t even necessarily buy anything. They just wanted to come by and say hello and welcome us back.”

The General Store at MGH is usually staffed by a team of 11 volunteers, who do everything from work the cash register to assisting with stock, buying and merchandising.

So far, only some have returned to work as part of MGH’s phased volunteer re-integration, which will see volunteers re-enter certain areas of the hospital in stages. Brendon says he looks forward to the day he’ll be able to see his whole team again.

“It’s weird running the gift shop without them,” Brendon says. “It’s different. It feels like we’re missing something because, usually, they’re always here helping out.”

For now, he’s finding comfort in the interactions he and his volunteers are able to have with the General Store’s loyal patrons again. “I love seeing our customers and having conversations with them,” Brendon says. “We have a lot of staff and patients who come in regularly and our volunteers know them. They’re always chatting about their days or just catching up on life.”

Laura feels similarly. “It's nice to be able to brighten everyone’s day with a smile,” she says. “Of course, it's different with a mask on. But the feeling is the same.”