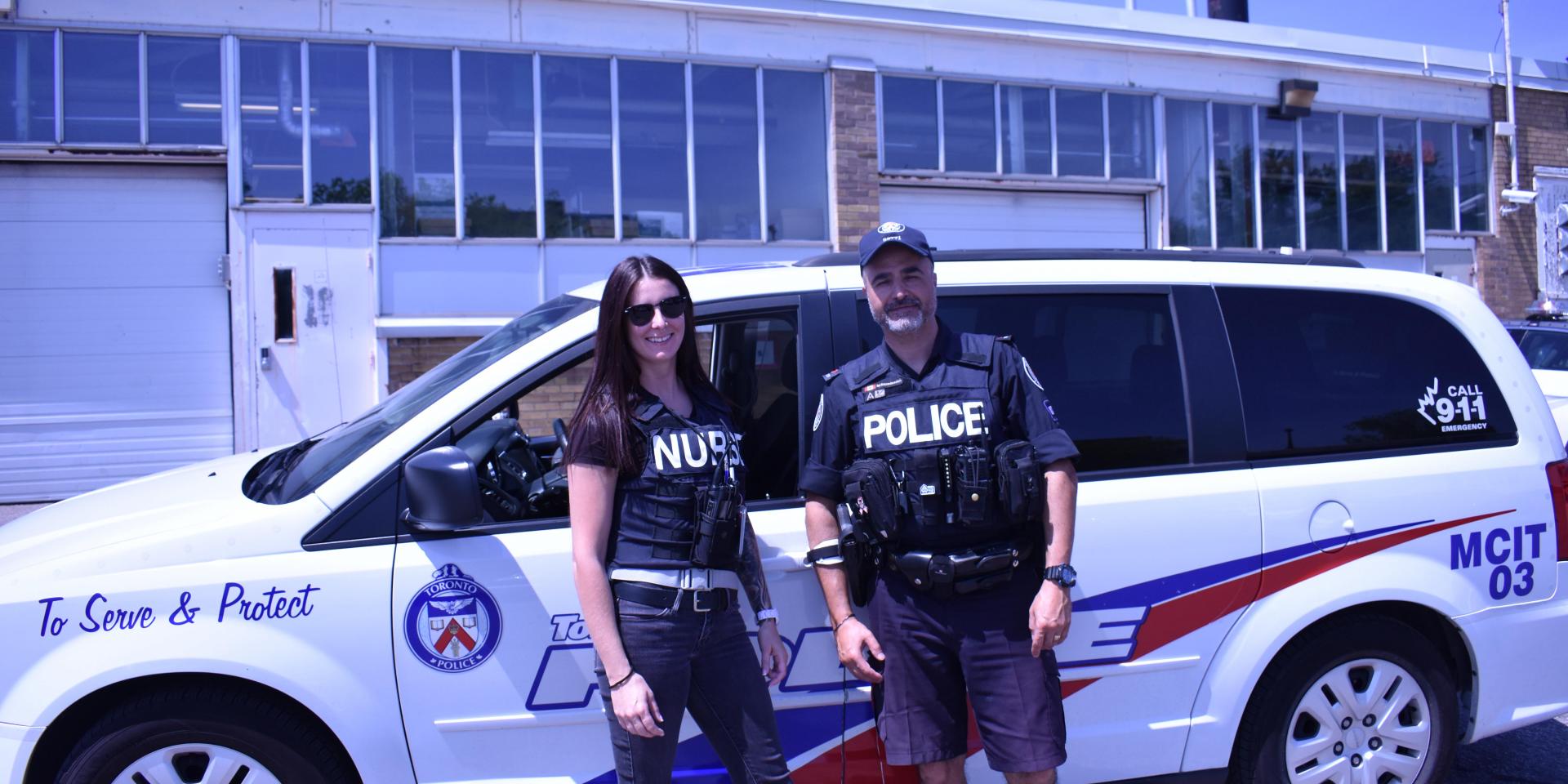 “Alpha to sign on,” Toronto Police officer Mehrdad Sayed Zadeh says into a Walkie-Talkie as he starts his shift. The van is running. He scans the system for situations that could use his help.

He’s not the only one in the car, though. Beside him is Tessa Birtch, registered nurse.

“The utility of a nurse and a police officer offers twice the knowledge when you’re dealing with something on the street,” says Tessa from the front seat.

Wearing a black T-shirt, jeans, and combat boots, she looks tough yet approachable. A fresh tattoo on her arm can be seen outside of the bullet-proof vest she wears on the job reading “NURSE.”

“The more heads you have put together, the better the outcome for the client,” says Tessa.

In 2018, nearly 30,000 mental health calls were made to Toronto Police Service. MCITs are a secondary-response tool. They can be assigned to emergency calls either after a Primary Response Unit (PRU) deems it safe for the team, or alongside the PRU.

Not only does the expertise of the team take pressure off the health and justice systems, they also build relationships with individuals in the community to more deeply understand their needs.

“The more you listen, the more they [clients] talk, the more information you get and the calmer they become,” says Police Constable (PC) Sayed Zadeh.

PC Sayed Zadeh and Tessa are one of seven MCITs on duty throughout Toronto from Friday to Sunday. On weekdays, there are nine teams across the divisions.

The team heads to their first assignment. Siren booming from the police van, PC Sayed Zadeh hits the gas pedal harder as they rush to help a young man in East York. Tessa reads up on the case from the computer system before they arrive.

The client was discharged from hospital just two days before. He began panicking when he couldn’t find a few of his personal belongings, and the situation escalated. After seeing him grab hold of a knife, his parents made the call to 9-1-1.

Tessa and PC Sayed Zadeh pull over on a quiet residential street. The family is gathered in the backyard of their home with the PRU. Once they arrive, Tessa takes the lead and gently asks questions about his mental health routine.

After a little while, she explains to the client that he’s going to be taken to the hospital to get more help, and he calmly agrees.

“The goal is to always have a positive interaction with individuals. I mean, they’re obviously having a bad day,” says Tessa.

The duo says many of the calls they respond to involve potential suicide, psychosis, anxiety, and substance use. Sometimes individuals in crises are experiencing a combination, so the ability to identify the best course of action through observing factors like body language, trigger words, food and hygiene, is vital.

Tessa has been part of the MCIT program for five years. Prior to that, she was a nurse in a psychiatric ward in a downtown Toronto hospital - an experience she feels prepared her well for life on the road.

“I can recognize somebody who is functioning at their baseline from somebody who is actually really sick and needs treatment now,” says Tessa. “Knowing about medications helps me a lot when I’m on the road. I may see or ask questions that police may not ask, and obviously they learn all of that as we go.”

Tessa says a tough but true reality of the job is trying to assist clients in need who won’t accept help.

Section 17 of the Mental Health Act gives officers the authority to apprehend individuals to get psychiatric assessments for their own safety. According to program data, 60 per cent of MCIT clients are successfully diverted away from hospital emergency departments using other methods for example a follow up with a family doctor the next day or a referral to a community mental health service.

Checking up on clients a few days later, offering helpful resources, or making  a call to their family doctor to schedule an appointment can be more effective in de-escalation and letting the individual know there is support, says PC Sayed Zadeh. He’s been an officer for nearly a decade, and joined the MCIT program last year.

“No day is ever the same. I got this job because I felt like I could make a difference,” says PC Sayed Zadeh.

“If I can put somebody on the right path, I’ve done my job. That’s why I do it.”