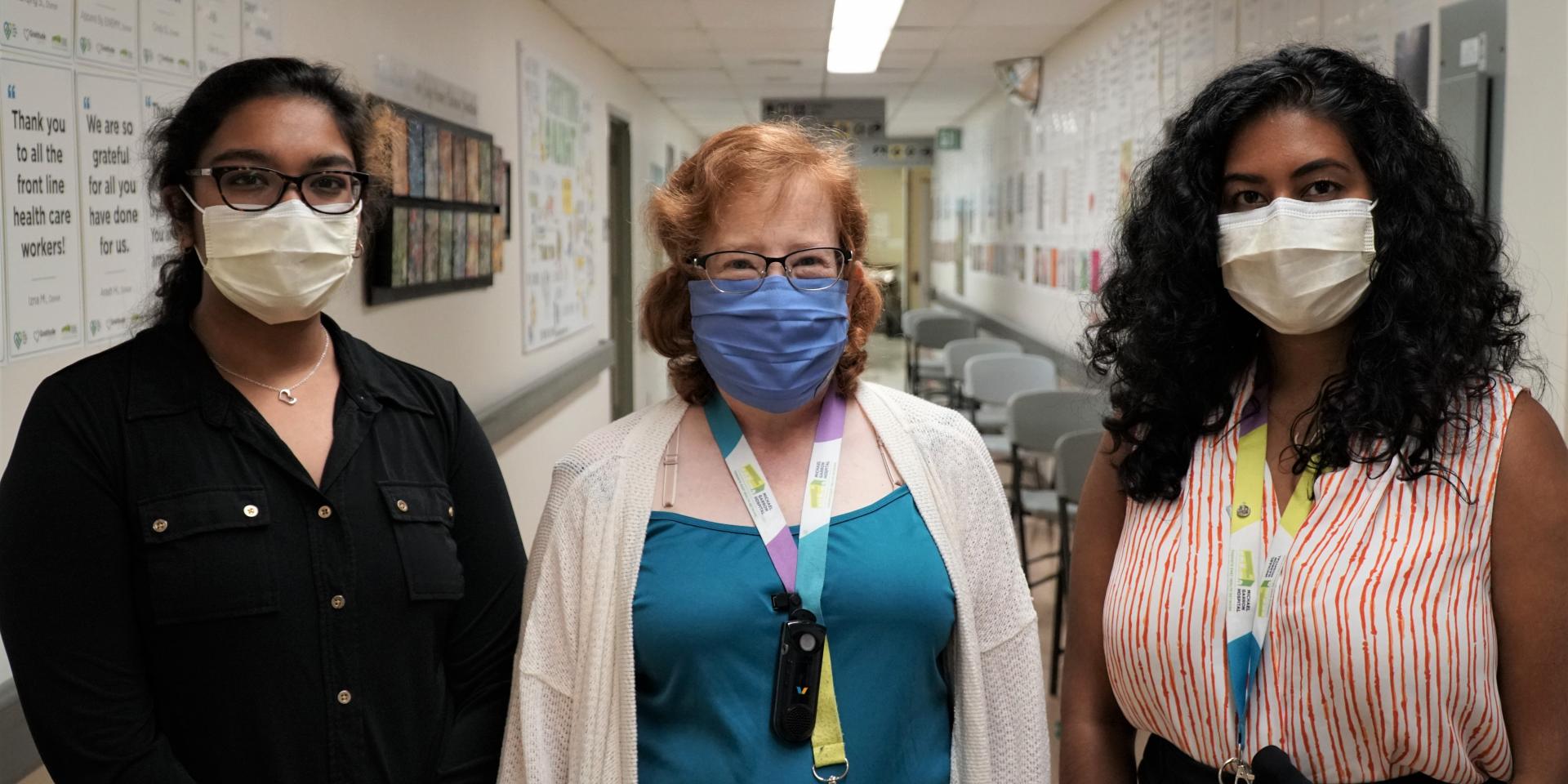 With just three years of nursing practice under her belt, Emmanuella Ezeri considers herself “relatively new” to the healthcare field. “I don’t have the experience of 20 years, 30 years that some other nurses have,” she says.

But when the registered practical nurse (RPN), who works on Michael Garron Hospital’s (MGH) nursing resource team (NRT), received the opportunity to be redeployed to long-term care (LTC) homes in March — ones that were experiencing COVID-19 outbreaks at the height of the pandemic — she didn’t hesitate to dive in headfirst. “It was a challenge and I was excited for a new challenge,” she says.

For three months, Emmanuella worked at both MGH and LTC homes in the GTA. There, she cared for critically ill patients and helped LTC staff with tasks like hypodermoclysis and IV administration. Eventually, she trained the on-site nurses on these duties, too, so they would be better equipped to meet the increased demand in care. “I didn’t just want to give them fish,” Emmanuella says. “I was trying to teach them to fish, too.”

Many shifts at the LTC homes were long and “hectic,” Emmanuella says, and required quick thinking and resourcefulness as the team navigated shortages in personal protective equipment (PPE), an issue that plagued many care facilities during this time. Still, she says she wouldn’t have changed a thing about the experience. “Nursing isn’t about being comfortable,” she says. “It’s supposed to challenge you and put you up on your feet.”

Emmanuella’s shifts were among more than 4,800 at MGH that changed sites during the pandemic when a surge in traffic in some hospital areas, like the intensive care unit (ICU), and a ramping down of services in others, like surgery, meant many nurses, personal support workers and others had to be temporarily reassigned to meet evolving needs in different units.

Some, like Emmanuella, were redeployed off-site to LTC homes and pop-up COVID-19 assessment sites in the community. Others, like registered nurses (RN) Bishnu Kandel and Glenda Fernandez, found new temporary homes at MGH. “I didn’t go to school for ICU training, so I was excited, nervous,” says Bishnu, who was redeployed to the ICU from general internal medicine in March. “There’s been lots to learn. With the support of the nursing and management teams in the ICU, it’s been a smooth transition.”

Glenda, who was also redeployed to the ICU from general internal medicine in the spring, says she appreciates the opportunity to build on her skillset. She says it’s been a goal of hers to become an ICU nurse since she witnessed the critical care her grandmother received years ago in the Philippines. “Nursing is continuous learning,” she says. “Knowing your limitations and having the initiative to embrace learning will help you grow professionally.”

Emmanuella’s, Bishnu’s and Glenda’s redeployments were facilitated by a team of MGH staff — some of them redeployed themselves — who set up a makeshift command centre in the hospital’s Gray Steele Boardroom on March 23. With in-person meetings suspended as a result of infection prevention and control (IPAC) guidelines, the conference room became the hub of an internal “matchmaking” system that coordinated the relocation of surplus staff to areas where their skills were needed most.

It was the first time MGH had set up a formal redeployment centre, a measure that’s outlined in the hospital’s emergency response plan. “It was a rapid prototyping and redesign process,” says Jasmin Soobrian, an improvement consultant in MGH’s organizational quality and safety unit who was redeployed to help design and manage the day-to-day operations of the redeployment centre. “We were essentially building the plane while flying it.”

Sandy Cowie, an occupational therapist at MGH, was also redeployed to the centre. Working with a small team, Jasmin and Sandy managed a flood of data from dozens of MGH units, redeploying more than 60 staff a day during COVID-19’s peak. The process involved developing detailed forms where unit leaders could identify what surplus staff were available or, on the other hand, what staff were needed. The team also developed a survey early on in the pandemic that recorded the skillsets of all 3,000 MGH staff, so some clinical areas, like the ICU, could more easily determine which caregivers were best equipped for their departments.

“I’m proud of our flexibility and our ability to address time-sensitive, rapidly evolving needs over the course of the pandemic so far,” says Taylor Martin, manager of the NRT and new nursing initiatives at MGH who, along with Gwen Elling, manager of human resources, oversaw the redeployment centre.This information was relayed directly to the redeployment centre where Jasmin, Sandy and others filled staffing needs with the individuals available, coordinating with clinical programs whenever necessary. “For every single redeployment match we made, we would make a phone call,” Jasmin says. “So it was a lot of work in terms of making sure each employee knew where they were going for their next shift or, in some cases, the next few weeks or months.”

Jasmin says she and Sandy regularly engaged with unit leaders and applied feedback to ensure the process was as streamlined as possible. It was also important for surplus staff to receive reassignments that best fit their abilities and schedules, and that they were set up for success in their receiving units. “We have a lot of roles within the hospital and a lot of different skillsets,” says Sandy. “So it was about making those matches work in a way that was going to meet the organization’s needs while also ensuring that people were using their skills to their best advantage and to the patients’ benefit.”

Any outstanding needs were filled by the staffing office, which assigns where members of the NRT go for each of their shifts. Leann Jeethan, a scheduling clerk in that office who worked alongside Jasmin and Sandy in the redeployment centre, says her workload definitely increased from March to June. But she felt pride in being able to help “behind the scenes” during the pandemic. “I get peace of mind when I’m able to fill staffing needs with people,” she says. “And when I know units have the sufficient number of people needed to run smoothly.”

With the ramping up of services across MGH, the redeployment centre stopped actively redeploying staff on July 19. But the success of the centre during the past few months means MGH now has a reliable blueprint in future events that require the redeployment centre to be relaunched. “I’m proud of our flexibility and our ability to address time-sensitive, rapidly evolving needs over the course of the pandemic so far,” says Taylor Martin, manager of the NRT and new nursing initiatives at MGH who, along with Gwen Elling, manager of human resources, oversaw the redeployment centre.

Taylor says, if reassembled, the redeployment team will continue to take a “people-centred approach” by ensuring training, resources and information are available to redeployed staff so they feel safe and supported in their receiving units. Sandy says she appreciates how so many MGH nurses, nursing attendants and others went above and beyond their duties. “We were phoning people and asking them to do something that was maybe outside of their comfort zones yet all of our staff were really receptive and understanding,” says Sandy.

She’s confident — and grateful — that MGH staff like Emmanuella, Bishnu and Glenda will be ready to be redeployed again if the time comes. “It’s very rewarding to be looking after very sick people when they really need us,” Bishnu says. “That’s the whole point of nursing: caring and supporting not only patients but their family members, too.”

“I would definitely do it again,” adds Emmanuella. “I would not even blink or bat an eye.”

Gratitude in the midst of a pandemic