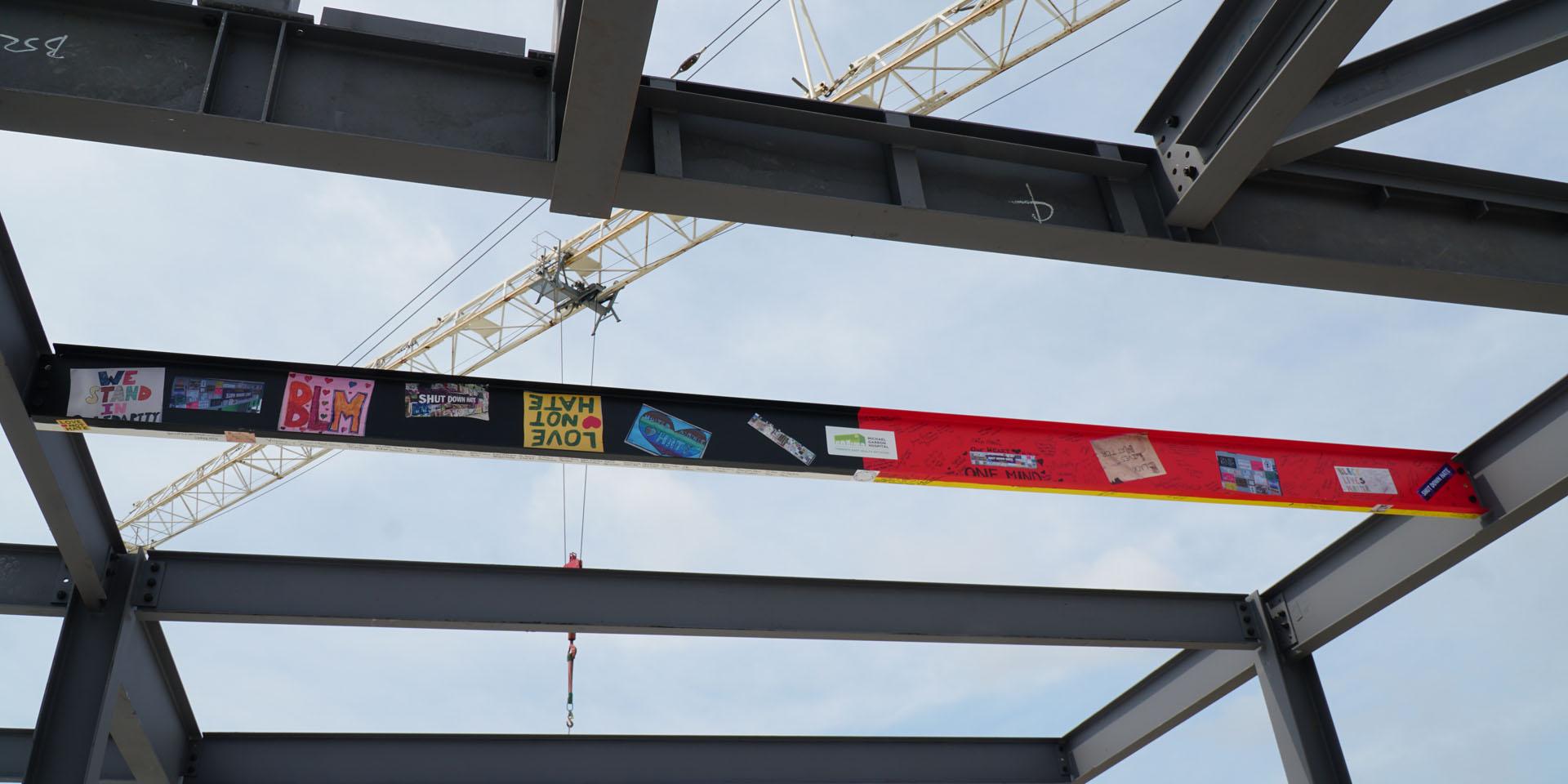 On August 26, 2020, Michel Garron Hospital’s (MGH) final structural beam was lifted into place on top of the Ken and Marilyn Thomson Patient Care Centre, a project which the hospital broke ground on in April 2018. The final Unity Beam was installed within the mechanical penthouse located on the roof of the new Centre.

This is a significant milestone for MGH’s redevelopment project as it signals the completion of the building's steel structure and gives the hospital the green light to continue forward with the project’s interior works.

To celebrate this important milestone MGH invited members of the community to sign the Unity Beam on August 24 before it was lifted into place.

Signing the Unity Beam publically declared one's support for the organization and the care it provides to the East Toronto community and solidified one's place in the legacy and history of Michael Garron Hospital moving forward.

Registered nurse Karen Butler, who has worked at MGH for 36 years, was one of the first people to sign the Unity Beam. “I was excited to add my name to the beam since MGH has been a part of my life for so long. It felt right to have my name become part of the building. When I learned which edge would be facing toward the sky, I knew that's where my name should go. Always looking up.”

Another person who chose to come out to sign the beam was orthopaedic surgeon, Dr. Jihad Abouali.

“I came out to sign the beam because I was inspired by The Aboriginal Healing Program community that named the beam the Unity Beam. I have the privilege of working at Michael Garron Hospital, which takes care of perhaps the most diverse population in Toronto. Now, more than ever, it's important to show our solidarity with racialized and marginalized communities in Toronto, so I was honoured to be a part of the signing that promoted inclusivity.

“For me, my name on the beam wasn't important, but rather it was my message. I wrote, 'We will always be here to take care of East Toronto.' I have worked and lived in this community for over eight years and I look forward to many, many more. I hope to one day leave a legacy at MGH, not with my name on a wall, but in the hearts of my patient's knowing I did my best to take care of them.”

In addition to staff and community signatures, the Unity Beam was painted the four colors of the Medicine Wheel, the People’s Wheel by MGH’s Aboriginal Healing Program community. The colors — yellow, red, black and white — signify the four doorways and unity of the nations.

Elder Little Brown Bear, MGH's director of Aboriginal education, programs and culture and The Aboriginal Healing Program, shared his vision behind the Unity Beam and the need for healing. “It's not the hateful act that took place that we’re cleansing; it’s the lasting memory from it, the traumas and challenges that community members have faced and that have been imposed upon humans around the world.”

“The Unity Beam speaks to putting unity back into community” says Elder. “Our traditional teachings speak to walking together in unity to heal from the pain, restore dignity and to create a peaceful harmonious place to live on Mother Earth our Earth Mother. I truly believe that through reconciliation, reclamation, grieving, practicing forgiveness, building healthier relationships, and finding a balance, we can leave a better future for our children, grandchildren and those yet to be born.”

Prior to painting, Elder Little Brown Bear smudged the beam to cleanse the steel and eliminate any negative energy.

The Unity Beam was also adorned with art created as part of the community activism display in June. The art was applied by Zahra Dhanani, co-owner of Old’s Cool General Store, a store which is dedicated to building inclusive communities, social justice and calling out hate. Zahra helped spearhead much of the community efforts in June and has rallied the community together in support of hospital and the construction workers onsite.

Having this artwork permanently applied to the beam helped ensure the community’s positive energy and voice was brought into the structure and that the building continues to be a place of healing, care and inclusivity for generations to come.

Now that the steel structure for the hospital’s Patient Care Centre is complete, the next major milestone will be completing the exterior envelope and getting the hospital closed in. MGH will also continue to actively work with leadership and frontline teams in order to prepare clinical operations for moving into the new facility.

The Ken and Marilyn Thomson Patient Care Centre will open its doors to the community in 2022. 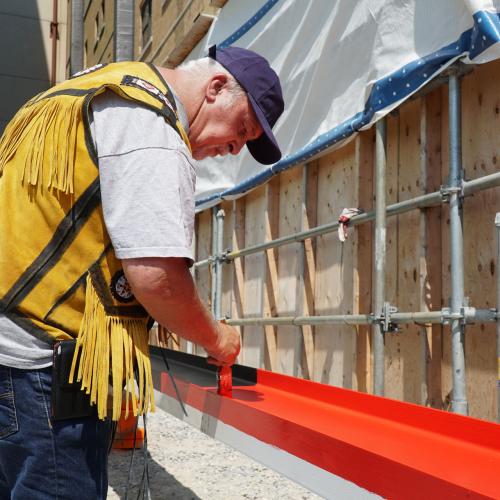 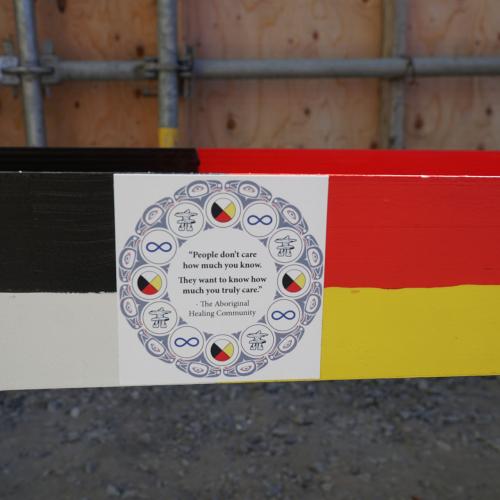 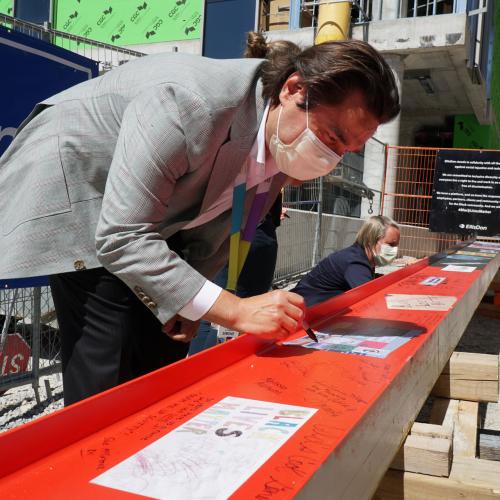 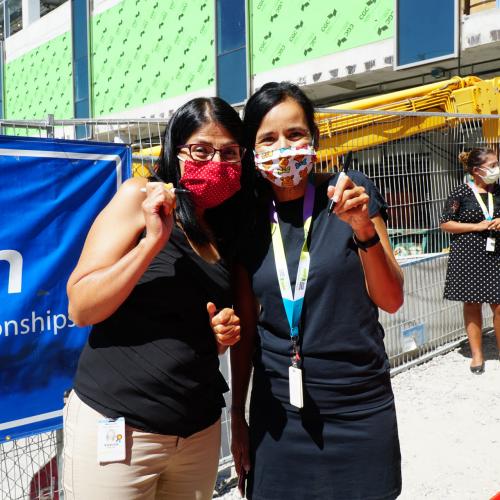 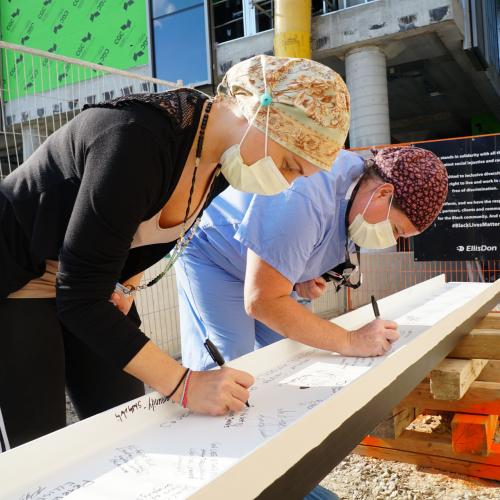 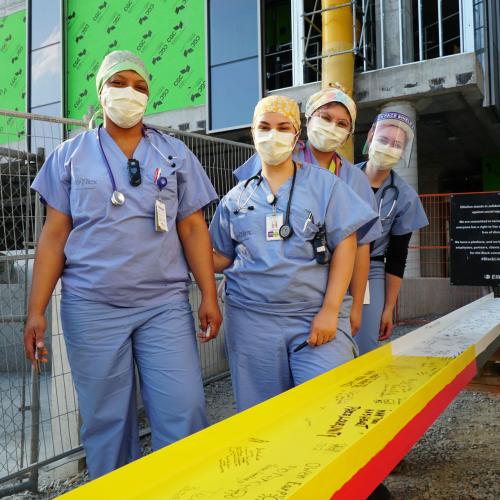 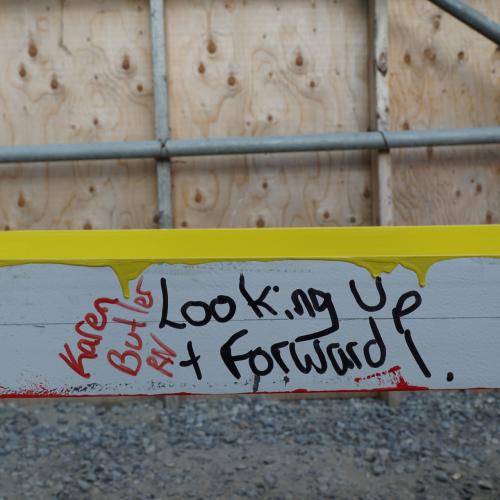 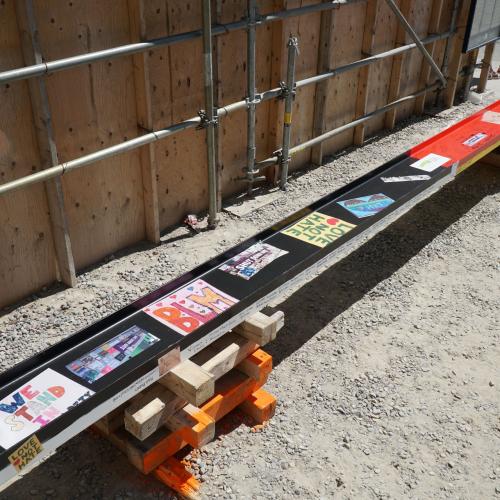